PORTRAITS OF THE HISTORIC & ICONIC

I love history, therefore I really like to aim my camera at old, historic and iconic buildings, statues, and structures. My first tip is to refrain from simply taking pictures of them. Doing so makes you a tourist, not a photographer. Treat them like you would any subject-- consider the composition, lighting, timing, exposure, technique, and time of day or year.

I treat them like a portrait, trying my best to capture their beauty, uniqueness, best features, or any photographic perspective that brings out its history. The word itself includes a story.

So, let me start with what remains my most unique approach and technique. The story behind this structure is key to the approach I took.

The Alamo in San Antonio, Texas has a super interesting story. It was that story that led my right brain to come up with the idea of superimposing the heroes of the Alamo onto the facade of the structure. Using my camera's built-in multiple exposure feature, I photographed a section of a nearby obelisk depicting the heroes of the Alamo and superimposed it in front of The Alamo. I explain this technique in Right Brain Photography, available through Amazon. 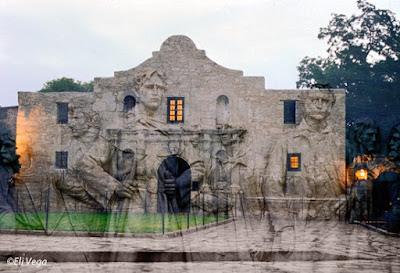 This is the oldest bar in Denver, Colorado--The Buckhorn Exchange. I like photographing buildings and structures at twilight. Interior lights are on at this time of day which  brings out details and shows off my subject's character.Additionally, if the building has interesting sides, I like to include them too. It gives the structure a three dimension look. 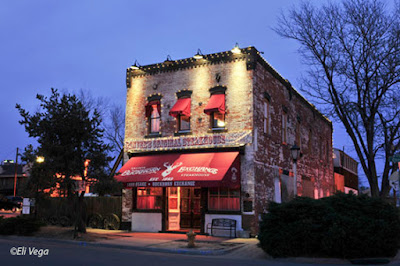 Since we're in Denver, let's check this beauty downtown-- The Brown Palace. Many dignitaries and celebrities have stayed there, including The Beatles The corner where two streets meet at 45-degree angles was the perfect spot from which to shoot. The dark twilight hour allowed me to use slow shutter speeds, which gave me those cool car light streaks. 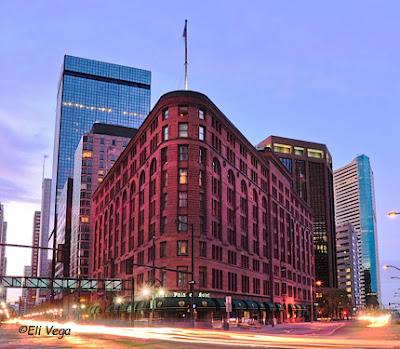 Millions of people know of the photogenic Mormon barns along Mormon Row near
Jackson Hole, Wyoming. As for composition, perspective and angle were key in depicting the context in which these barns were built--near the Grand Tetons. A low angle, about two feet from the ground, gave the barn heightened prominence and placed the mountains near equal to the barn's roof. 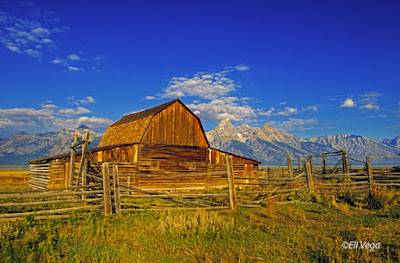 There is a beautiful stucco Catholic church in Taos, New Mexico known colloquially as Ranchos Church. Surprisingly, it's backside, to me, has more artistic value than the front, which looks like so many other stucco churches. Evidently Ansel Adams and Georgia O'Keeffe thought so too.

I had seen tons of photos and paintings of this beautiful 1815 church. All of them were during the day. During one of my several trips to northern New Mexico, I wanted to do something different. So, I went out after sunset to see what the shapes and angles looked like at night. I liked it. It's a study of color, shapes, and form. The subject itself is secondary. 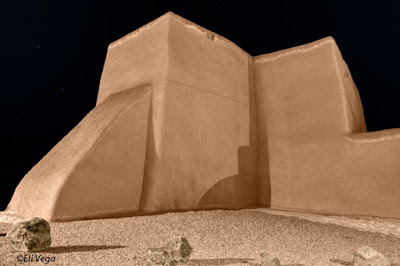 St. Francis Xavier in Lucern, Switzerland was built in 1677. It's majestic presence is obvious. I wanted to pick up that character through my camera, so I got up early one morning to get that nice warm glow to it and the city in general. From that angle and perspective, it's beauty was repeated in its reflection in the Reuss River. The interior of the church is just as awesome as its exterior. Mt. Pilatus serves as the backdrop. 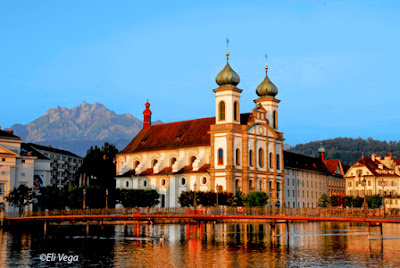 The next two examples are in the little quaint and historic town of Eureka Springs, Arkansas, in the northern Ozarks. The first one is probably the most photographed building in town-- The Flatiron building. If I shoot before delivery trucks arrive, I can have the whole town to myself--no people, no cars; just the town showcasing its charm. 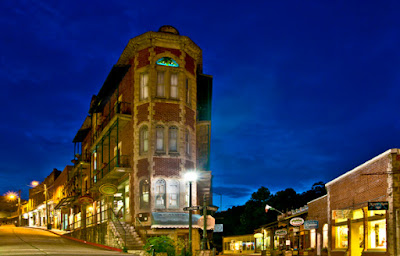 Another iconic and much-visited structure in town is glass-encased Thorncrown Chapel. What I often do is go on-line and see what photos others have taken. I don't look so much what's been done, but what has not been done. 95% of photos I saw were in the daytime. The ones in the evening were shot straight on; looking right at the front of the structure. What I didn't see was a three-dimensional perspective.

One day I called their office to ask permission to photograph it after visiting hours. They allowed me to go after hours, at twilight. I had the entire grounds to myself. The situation allowed my to look for different angles. This was the angle I had not seen. 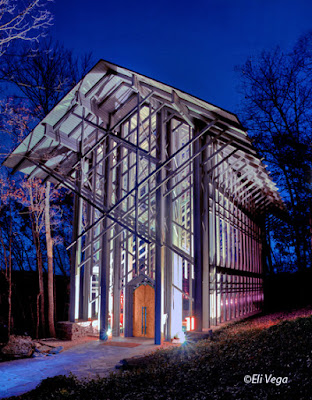 The final two examples are in the underrated city of Hot Springs, Arkansas, which has its history rooted in natural and healing natural spring waters, nature, gambling, and mob visitors. It certainly has its share of historic and iconic buildings and structures.

Here are just two of the many I have seen and photographed. I'll start with the iconic MALCO theater. It has a rich history and story. Before racial integration, there was a "Colored" back entrance where tickets were purchased for their balcony view of current movies. The ticket booth is still there as a reminder. President Clinton frequented the movie theater during his youth. It is now home to Maxwell Blade's magic and comedy show. The Art Deco building holds its own among other historic and iconic buildings in the city. 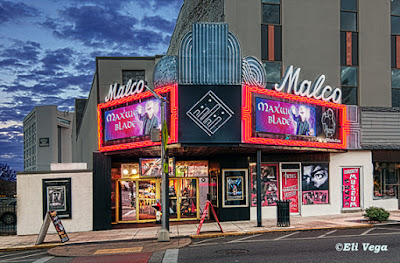 Angel's Italian restaurant in the heart of downtown is in another historic building that reminds me of something I would see in Chicago. Nighttime seemed like the right time to bring out it's "Ay Tony!" character. Once I set up my equipment and decided on my composition I waited for cars to clear so I could get a clear shot of the corner restaurant. While I waited, this man walked out and stood on the corner. I knew that was the moment to go "click." The time of day, composition, lighting, and the human element all  gave me more than just a snap shot of Angel's. 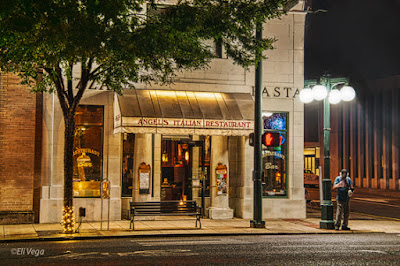 Every city and town has unique historic building, structures, and statues. Go out there some early morning, late afternoon, or evening and see if you can bring out their character, charisma, and charm.