I rarely photograph other people's art, unless I can create my own art from it. Such was the case when I attended this year's annual Breckenridge (Colorado) International Snow Sculpture competition. Even though I photographed several of the 12-ft sculptures, my favorite images were those where I "tightened up," or closed in tight to only a small portion of the large and ornate sculptures.

One particular sculpture got my attention: the Wisconsin team's sculpture titled "Wander," a story in a sculpture of the pilgrimage of the Monarch butterfly--did you know those little critters migrate between southern Canada and Mexico? It was a relatively warm sunny day in Breckenridge--something the artists don't like because their art begins to melt. Their disappointment served as fodder for my art. I tell my students that there's always a picture within a picture. After I photographed the detailed sculpture, I started scanning several parts of it, which led me to the swan-like shape on the upper left part of the sculpture. As I carefully inspected that piece, I noticed that the warming temperatures were creating a slow drip from the beak. I instinctively knew that was my shot.

After I got my composition, my next challenge was to catch a drop of melting cold water in mid air. I studied it first and mentally timed how long one single drop took to separate from the melting beak. In doing so I could also tell that when it did actually fall, it went very fast. So I knew I had to use a very fast shutter speed. I already had my ISO set 200, which is where I normally keep it. I chose f/8 because I didn't have much depth of field to play with. That combination gave me a shutter speed of 1/1600--more than fast enough to "freeze" those little drops in mid air. It took me eight tries to get what I wanted. 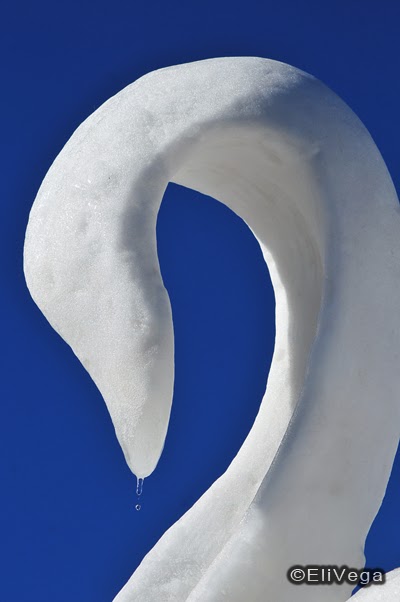 Below is the entire sculpture. For a sense of scale, note the person to the left of the sculpture. As you can see, what I saw can be easily overlooked. That's why I like to slowly scan to see what else I can extract from the scene before me. This is part of my "I.S.E.E SOMETHING" model, which I discuss in my 3-day workshops in Rocky Mountain National Park, and which I will introduce in my upcoming book, RIGHT BRAIN PHOTOGRAPHY (Be an artist first). 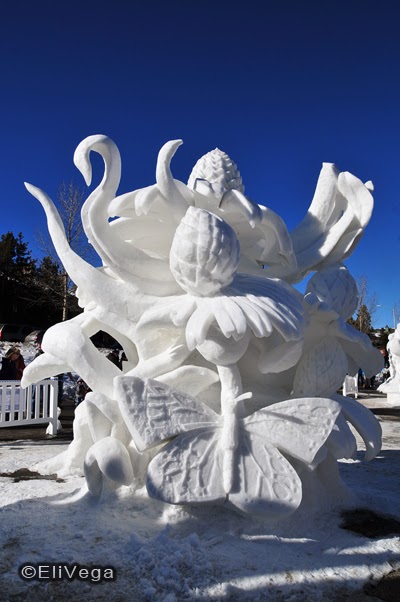 So, go out and see what you can extract from the big picture! Have fun.

www.elivega.net
Posted by Eli Vega Photo Artist™ at 10:42 AM No comments: