I have been fascinated with surrealism since the days as an art major in college. Although there were several surrealist painters, the god father of Surrealism, to me, remains Salvador Dalí, the painter from Spain.

I explain surrealism as the juxtaposition of things in life we don't usually associate with one another. A good example are tulips and ice--we don't think of the two in the same sentence.

Characteristics of surrealism include: the element of surprise, sometimes shock. Incongruencies. A combinations of elements that leave us scratching our heads with surprise, confusion, perplexity. In real life, I sometimes find humor in the odd combinations.

Whenever I am out and about with my camera, I am always on the lookout for those characteristics. They're out there. I just have to be alert.

Want to see the surrealism I've seen? Let me show you some examples.

Let's start off with some humor.

I found this great mind twister in Steamboat Springs, Colorado several years ago. Unfortunately, the coffee shop, which this was part of, does not exist anymore--nor does the head-scratching bathroom. 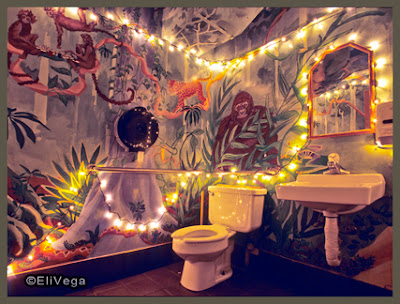 The unexpected scale of a simple leaf bigger than two human hands brought out the
Dalí in me. I visualized this before I pulled it together. I found the huge leaf and knew
I had to do something with it. I kept it at home until I decided. A couple of days later,
a friend came to visit me. I asked him if he would help me construct this visual. I let
him borrow my black fleece pull-over so it would blend in with the black flannel material
I used as a backdrop for this creation. 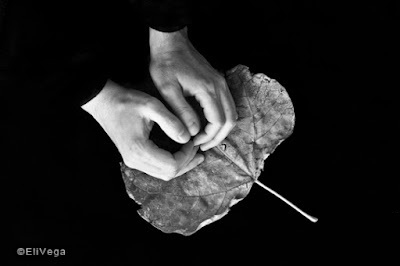 You don't expect to see such a dainty figure, by herself, in this harsh environment, surrounded by steel, concrete, and sharp angles. This image begs questions: Who is she? What is she doing there? Where is she going? What's with the heels? 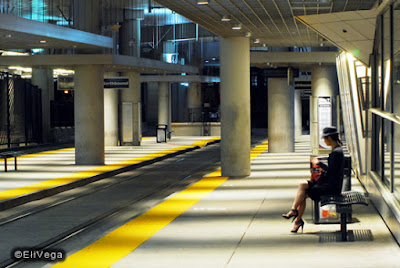 Sometimes things are just out of context. Here we see a close up of an old Farmall
tractor steering wheel. What the mind expects to see in the background are a farm house,
maybe rolling hills, a barn--not an out of focus case with farm toys. As you can see,
my range of surrealism is all over the map. 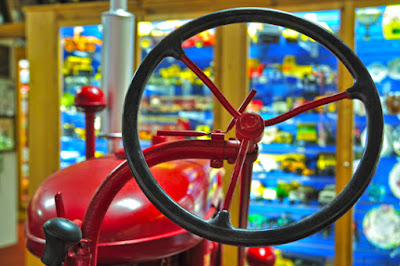 This looks like something Salvador Dali would have painted---a beautiful nature scene with rocks floating in the air. 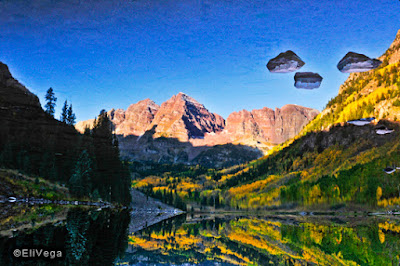 For the above image, I photographed the reflections of the peaks (Maroon Bells in Colorado) in the lake. I knew I was going to show it "upside down" to get this effect.

I saw these street performers on Pearl Street Mall in Boulder, Colorado. The surrealism was in their silver-painted faces and clothing. In addition, I saw the skinny guy in the background with red lips that stood out against his silver face. I had my camera aimed at them, just waiting for something to happen. Then, for a split second, the skinny guy looked at me, as he stood between the other two in the sunlight. The instant I got this shot, he retreated into the dark background. 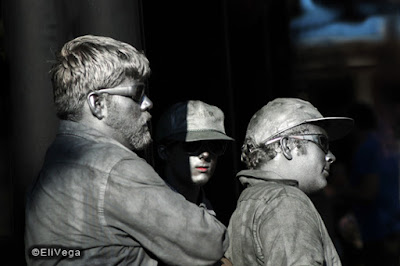 One more. I was hiking in the Lost Valley area in northwest Arkansas when I saw this.
There was a hole in this decaying but still standing tree! The visible root arms stretched out like dinosaur feet. 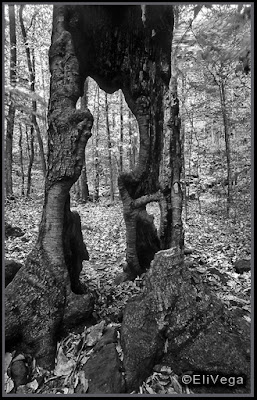 So, go out there with Dalí eyes and keep your eyes open for the bizarre, the unexpected, the weird. If you can't find it, create it! Think right brain. Have fun!

Posted by Eli Vega Photo Artist™ at 2:13 PM No comments: