My blog last month was about underexposing scenes. This month, I'm going the opposite direction. Don't be afraid to overexpose scenarios you come across. I know, the most common advice, tips, and how-to recommendations would say, "Don't do it!"

There are several scenes that would look better overexposed. Let me show you several examples and explain why. The overriding reason why I would ever do this is simply related to what I see in my imagination, not what I see with my eyes. In other words, I don't try to get the best image of what I see. My goal is to create what is hidden underneath; to create what's not there. Confused? Here are some results of overexposure.

Let's start with this one. It was mid-morning during one of my field workshops, not midday. There was a lot of sun coming in behind all these branches, trees, winter-dry weeds, and flowers. If I had let my built-in light meter (and its heel-tapping cousin, the histogram) determine what the "correct" exposure would be, this scene would have been extremely underexposed. Instead, I overexposed it by +2 stops to bring out the sunflower. That's like telling the light meter, "I want you to give this scene 200% more light than you think it needs." The result is an airy, dream-like, mystical feel to the image. The fact that the sunflower is properly exposed is secondary.

If you have difficulty knowing when overexposing would be the thing to do, here are a couple of easy steps to remember: 1) Ask yourself, is the scene back lit (sunlight is behind your subject)? If yes, 2) Just ask yourself, "What would it look like if......?" 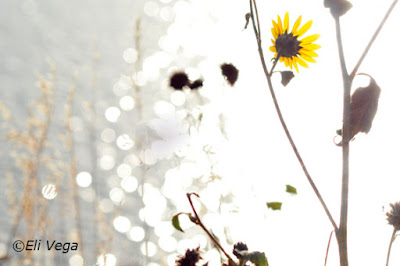 For this next scene, I saw this beautiful grove of aspens, coincidentally near Aspen, Colorado. They were in the shade in late afternoon. Rather than underexpose to get those vibrant darker hues, I instead overexposed them. Again, what if? I liked the results of a      +1 1/3 overexposure. For one, it really brought out the white aspen bark and the mellow yellow leaves in the background. As my students know, I have an art major background, which is why I like these painterly like effects. 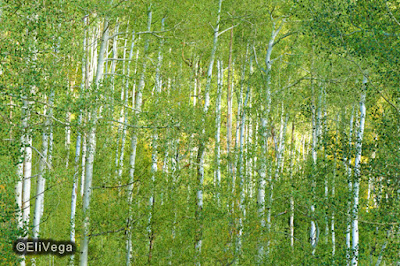 On the same trip, by the time I got to the iconic Maroon Bells near Aspen, I was way too late to get that traditional shot of the peaks. Rather than kick myself in the butt for not timing it right, I decided to go with the flow and create something out of the light I was given. The sun had gone down on the other side of the mountains, leaving the face of the mountains and the neighboring valley in late afternoon shade. It was getting dark, at 5:15 pm in late September. I wanted to see what I could turn the scene into by overexposing it by a +1 1/3, from what was already a long exposure. The effect was surreal.

I knew when I saw the scene through my viewfinder that there would be too much lake in the foreground. I cropped the final image to downplay the lake and draw more attention to Maroon Bells. The overexposure brought out the perfect dusting of snow.

I like getting up early, really early, for some of my photo shooting excursions. This particular day, I was heading west around 5:00 am in late July. As I checked my rear view mirror, I saw this "must do" scenario!!! I quickly stopped, pulled carefully over, and got my gear. I had to work fast. Click!  I overexposed the scene by + 2/3 to bring out detail in the landscape and sky.

By this time, you're probably wondering, "How does he know how much overexposure to give any scene?" Right? Don't let anyone fool you. This is more art than science. I don't know exactly how much is enough. True, sometimes I estimate and I "get it." However, most of the time, I bracket. But, I bracket extremely fast! My favorite tool in my toolbox is the exposure compensation dial, or, as I call it, the + and - dial. I have taught myself to work that puppy with lightening speed +1/3, + 2/3, +1. And I do it faster than it took me to write it!! 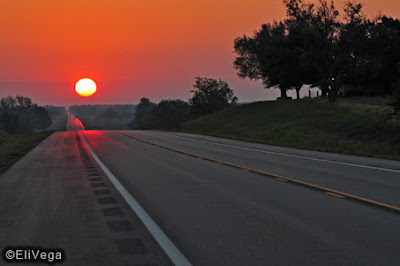 I will be leading my annual 3-day field workshop in Rocky Mountain National Park, Colorado this coming August 2nd-4th. Please contact me if you'd like to join us.

It was during one of my RMNP workshops that we saw this awesome moose in Sprague Lake. I quickly yelled out to my students, "Overexpose this one." One student told me later that she wondered why I was telling them to overexpose a scene in the middle of the day. This is how explained it to her: 1) The moose comprised a rather small portion of the scene, 2) There was a lot of bright area around him, 3) He was very dark. The over abundant sunlight throughout the scene would underexpose an already dark subject--the moose.

So, I quickly bracketed the scene, overexposing it. A +1/3 worked best for the scene. Usually, without the moose in the scene, I would have underexposed the scene by 1/2-2/3 to make the colors pop. In this case, to have done so would have turned the moose almost black! 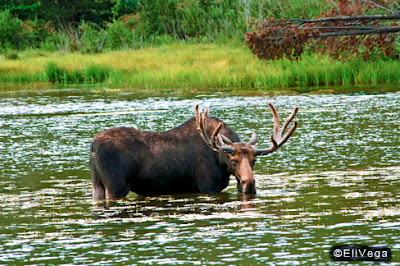 I included this last example, an abstract, in this discussion to point out that the concept of overexposing a scene applies to all scenarios--- landscapes, scenics, flora, and, yes, even abstracts.

I knew that the bright sky above, reflected in this small body of water, would underexpose the scene. I wanted to keep the white of the reflected clouds in the sky and the blues from the sky (notice the sprinkling of blue spots throughout). In order to achieve that, I had to overexpose the scene by + 2/3. 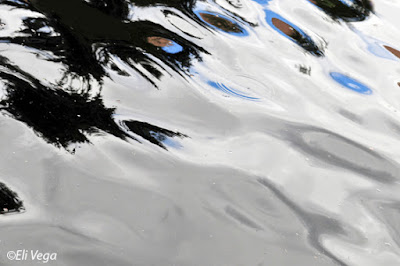 Before I conclude, let me include a typical exposure compensation scale on most cameras.
They look something like this. On my camera, it goes to a -3 and a +3.


So, now you know what I meant in this blog when I said I overexposed a scene. I over-
exposed them from a +1/3 to a +2. For example, when I aimed my camera at the first example above (the sunflower), my built-in light meter told me I needed a shutter speed of 1/3200 (my camera set at f/8). It was very bright that day. A +1 overexposure would have been 1/1600; a +2 overexposure was 1/800, which is the shutter speed used on that scene.

Now, go out there and put this to practice. Don't be afraid to override your built-in light exposure meter. You be the judge; you take charge and decide what your images will look like......then share them with us! Have fun.

Contact me if you want a 1-on-1 lesson or a presentation to your group.

Posted by Eli Vega Photo Artist™ at 7:39 PM No comments: