A lot of photographers still ask me how I create my in-camera double exposures. It's one of the techniques I use to create Impressionism through my photography. Unfortunately, not all cameras have a multiple exposure feature. However, if yours does not, you can create two separate images, following my step-by-step guidelines, then blend them with whatever photo editing software you use.

Throughout the years, I have come up with several double exposure techniques and approaches. For most of my double exposure creations I shoot on manual focus for more preciseness. Then, I follow these steps.

1b) I take a test shot, making sure it's not totally out of focus, but enough out of focus to create the desired "halo" effect when I combine both images. I also test for the right exposure--it shouldn't be too bright. I prefer slightly underexposed because the sensor (or film) will be exposed to light twice during the process.

2) If I like my out-of-focus test shot, I engage my double exposure feature and set it for 2 exposures.

3) Without touching anything, I take my first shot, knowing that I know I am satisfied with Step 1b above.

4) I then take 3 key steps for my second shot: A) Increase my f/stop to f/8-f/16, depending on the scene, B) Refocus correctly on my subject, C) Underexpose the second shot by usually 2/3 of a stop! Remember, the sensor is being exposed to light twice. If you don't follow step 1b and this step, you will get an overexposed final image!

5) I take my shot. If I don't like the results, I go back through each step and make necessary adjustments. I usually either change my degree of focus at Step 1a, under expose step 1b, and/or underexpose Step 4C.

When I follow these simple steps, I get varying results, depending on the subject. Each subject, composition, or specific lighting on the subject produces different results.See my varied results below.

My "Heroes of The Alamo" was my first commercial double exposure in the late 1980s.
I first photographed a portion of a relief sculpture that stood about a block from The Alamo. I then superimposed it over a photo of The Alamo. I didn't adjust the exposure for the second shot because I wanted a "see-through" effect. 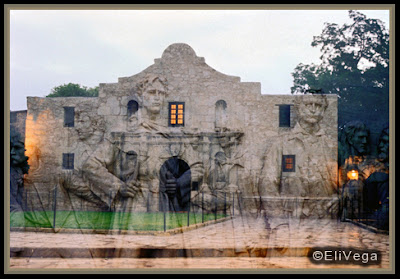 The minute I saw these colorful wildflowers near Crested Butte, Colorado, I knew I had to create two renditions, including a double exposure. I followed my own guidelines, step
by step, to create this "flowers on canvas" feel to the image. Flora of any kind, I have found, are the most conducive subjects for double exposures. 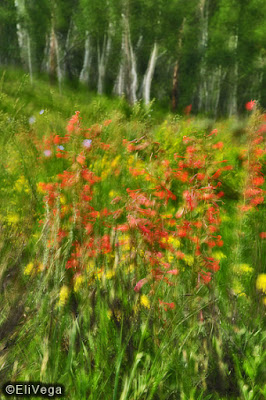 I am including a wide array of examples so you can see the different effects various factors have on double exposures. In the example below, a bicycle in the snow. I converted the original to a B&W since there wasn't much color. The deep shadows were created by snow drifts close to the bicycle's back tire.

The results of my double exposures are either an artistic water color or oil painting effect, or a dream-like effect--sometimes both in the same image. 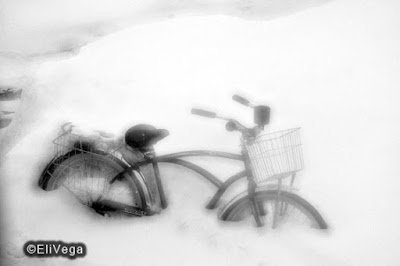 This was created during one of my "Make The Common Uncommon" workshops. I saw a clock and I saw coins in a jar and the idea of "Time is money" came to mind. So, I started rearranging the clock, the jar, and the coins. Then I lit the scene with two flashlights, one that gave out a gray/blue light and another that gave out a yellow/gold light. After I made this arrangement, several of us took turns, spending several minutes each on creating our own renditions. 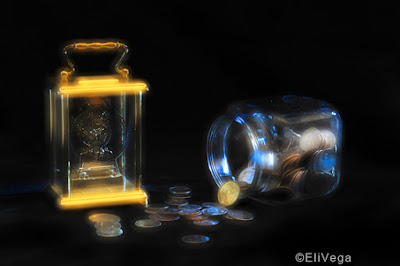 I imagined a photo from a documentary with the title, "Bury Your Butts." The direction all the cigarette butts were facing, against the dark menacing background, was a perfect scenario for one of my surrealistic images. The ghostly halo around the cigarette butts added a sense of nightmarish endings. 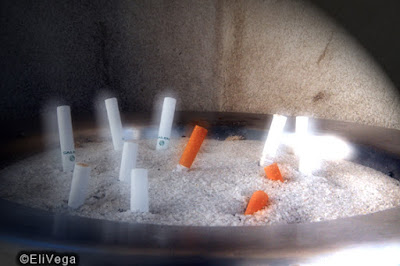 I will conclude with a more pleasing example of my double exposures. I hear you saying, "Yes, please!"

My last example is a little departure from my more traditional way of creating double exposures. The steps are basically the same, with one exception: Instead of taking the first image out of focus, I literally swirled my camera around a grouping of purple-colored flowers, then walked around until I saw a butterfly whose colors would complement the first blurred image. When I found the right butterfly, I then simply followed Step 4 above--underexposed the butterfly by 2/3 stop. And, voila!!! 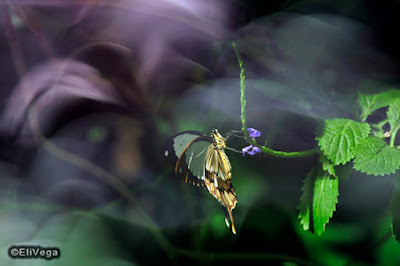 You can find more examples of my double exposures in my new book, RIGHT BRAIN PHOTOGRAPHY (Be an artist first). Contact me for your personal signed copy.

Have fun with double exposures. Do not be afraid to experiment. Allow yourself a little
imperfection--just flow with it. It's mentally and spiritually emancipating.

Posted by Eli Vega Photo Artist™ at 5:15 PM No comments: