Although anyone can use photo editing software to create ghosts, for me it’s more fun and more photographically challenging to produce them in camera.

The two most important components are a tripod and slow exposures. A tripod is necessary to keep every detail in the image crisp/sharp, except the ghost—that’s what gives the image that mystery and mystique. Slow exposures are a must in order to blur the ghost, and not make it turn out like just a real person that looks out of focus.

The final effect will vary depending on these variables: The environment/setting; how the “ghost” is dressed; the shutter speed (1 second vs. 8 seconds); the degree of movement or motion by your ghost model.

The environment/setting. I like to choose environments that are conducive to place a “ghost” in the image. I have used interesting rooms, stair steps, stair cases, and other backgrounds.

The shutter speed. I have experimented throughout the years with different shutter speeds.  I prefer a range of around 8 seconds to 15 seconds, unless my "ghost" is moving fast. These, of course, are not magical formulated times, just estimates. This is art, not science.  A 1 second exposure doesn’t give my model enough time to move, which affects the end result. However, eight (8) seconds or longer gives the model enough movement or motion to record a ghostly apparition on the sensor or film.

Each created image will require anywhere from 1-4 tries to get the effect you want. Sometimes I’m lucky enough to get the right estimates in advance. Other times, I need to instruct my model to do this, or do that, in order to get it right.

Now, let me walk you through my ghost creation process, step by step.

1) Sometimes I visualize my environment/backdrop in advance. If I see something when I’m
out and about, I might keep that scene in mind as a possibility, for future reference.

3) Now I’m at my selected backdrop/scene.
a) I decide on my composition first and foremost. I also remain open to any ideas
from my model.
b) I set up my tripod and camera based on my composition, without my model
in the scene yet. I take test shots for composition, depth of field, and exposure.
c) I then demonstrate what I want my model to do, how, how slowly, and when.
Once I start shooting, it might require 1-4 tries before it’s “a wrap.”

Okay. Now that you know how I do it, let me share some examples.

I was in the quaint historic town of Manitou Springs, Colorado. There are some awesome stone steps there called the Manitou Place Steps. For months, I had thought they would be a great backdrop for "ghosts."

One day I went there with that in mind---to create ghosts coming down the steps. I took my assistant with me that day to help me out. I knew in advance I was going to be my own ghost. After several attempts to create a ghost coming down the steps, I just wasn't satisfied with the results. Then, out of nowhere, this group of young friends started coming down the steps. They saw me and my tripod and one of them said, "I'm sorry, are we in your way?"     I said, "No, you're good," then quickly thought, "There's my ghost. Quick. Shoot!"
A 3-second exposure. They were walking down the steps fairly fast. 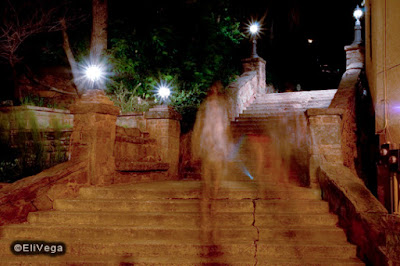 There is this secret abandoned house in Colorado I like to visit periodically. It's old, falling apart, dingy, inches of dust inside---it's great! My favorite room is an old bedroom. I call it
the "Blue Room." I have used it several times to create ghosts. This is one of my favorites. In this case, I was the ghost. It looks like the ghost is running toward its own shadow. I did
a double exposure. For both shots, the only thing moving are the ghosts. Spooky.

This was faster than most of my ghost shots (1/15), but I knew I was going to start running before my self-timer opened the shutter. 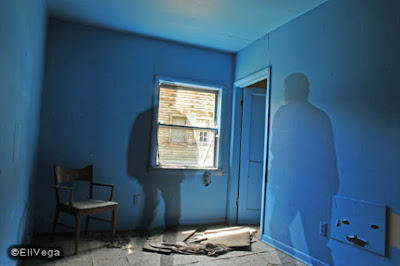 The Crescent Hotel in Eureka Springs, Arkansas. Built in 1886. It is known for its historic ghosts. Many guests claim to have seen spirits. I took one of their nightly ghost tours. During the tour I got this crazy idea of creating "ghost of the Crescent' images. Someone
I know in town agreed to be my model. We spent about two hours creating ghosts inside and outside the hotel. I ended up with eight good ghost images, which are being sold as 5"x7" note cards in the hotel gallery and gift shop. I told my model, "You're famous!" She quickly replied with, "In a ghostly sort of way."

Here are three of the eight.

For this one, I asked Roz to stand on top of the fountain wall and barely sway slowly back and forth. A 15-second exposure in late evening. 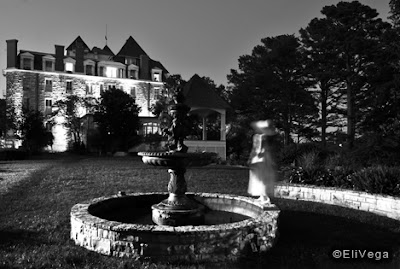 I wanted the ghost to be in front of the hotel, as if thinking of her past. Note
the two (real) guests standing on the third floor balcony. I also asked Roz to
slowly sway back and forth. A 10-second exposure. 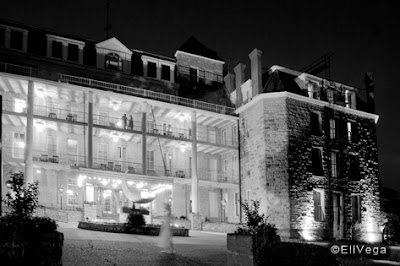 Some of the ghost stories revolve around some of the staircases in the hotel.
I wanted the ghost to be coming up the stairs as I looked down at it. For this shot,
I asked Roz to walk slowly up the stairs and pause just a second between steps. I guided her she walked. A 6-second exposure. 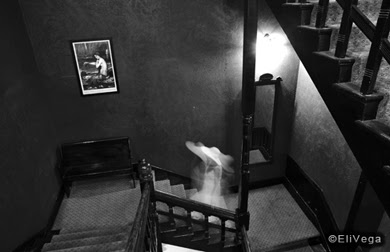 So, go out there and get spooky. Let your imagination run wild. Use my techniques and approach and give it your personal spin, coupled with your creativity and imagination. Most importantly, have fun with it. Send me some examples of your “ghosts.”

If you're interested in one of these ghost images as large spooky prints on your wall, give me a shout.

Posted by Eli Vega Photo Artist™ at 11:40 AM No comments: