In my book, Right Brain Photography, I spend an entire chapter on the subject of composition. I mention seven key principles of effective composition. For this month's tip, I will focus on just one of them--perspective. All seven principles are important, but if you forced me to rank them, I'd have to place perspective on the top of the list.


We are all so programmed that most of our images, if not all, are created from eye level. The most common variation is either a horizontal or vertical; landscape or portrait format--but all from eye level, as we stand there and shoot.

As viewers, we can't always tell that the photographer took a different, unique approach to perspective. All we know is that we like the image; it's different. And sometimes the perspective is so obvious that the image has that "wow" factor. In both cases, they take the "common" out of those common subjects. Here are some examples of where I took a different perspective other than straight from eye level.


For this image, I placed my camera close to and below this giant crucifix at a cemetery. I aimed the camera straight up at the statue and shot it hand held, making sure that I got a fast enough shutter speed to hand hold. I just happened to get a little bit of flare from the sun, which added to the religious-themed image. There is no rule that says our eyes have to be behind the view finder to get a shot. 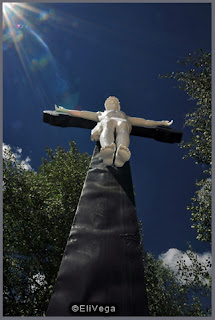 I did just the opposite for this image. I held my camera in front of me, slightly above my shoulders, aiming it straight down on this historic table setting. I changed my ISO to 800 in order to get a fast enough shutter speed to hand hold the camera in a dark indoor setting. 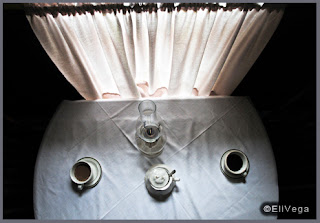 I saw this small piece on the side of a giant train engine. It was in an awkward place where I could not get a clean shot, so I placed my camera close to the engine and aimed it at about a 45-degree angle to it. The silver/gray part of the image is actually the side of the big engine, which was facing me. You're looking almost straight up at the red knob. 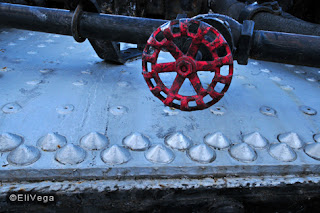 I got very low with my tripod for this one, about two feet. At that level,
the cobble stones "took" me into the image. It would not have had the same feel if I had been standing. There wasn't much color in the scene, except for one man's red umbrella, so I converted the original to a B&W, leaving the red umbrella untouched. 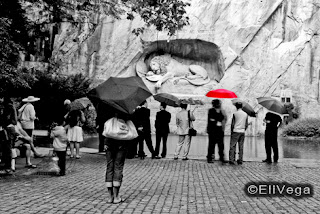 We have all seen photos of mountains. But what would they look like if we were at the very top of the mountains looking down at the world? That is exactly what I did after I scaled Quandry (sic) Peak in Colorado---14, 265 feet! 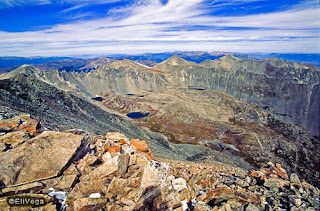 Whether we are photographing small, medium, or large subjects, we can make the common uncommon by taking a different perspective. Most importantly, we may oftentimes not get a photograph simply because the subject looks too common or mundane, therefore missing out on some unique images.

So, next time you think something just isn't worth a photograph, look again, think again, and reconsider your perspective, beginning with how you see life around you.

Posted by Eli Vega Photo Artist™ at 10:38 AM No comments: