I do not consider myself a portrait photographer. However, I do occasionally photograph people. I am drawn to people with a unique persona---perplexing, intriguing, surreal, mysterious.

People usually know in advance before I aim my camera at them. Sometimes I ask them to look at my camera; sometimes I ask them to continue doing what they were doing. I call what I do "people photography" because it might be a photo of a person, or small group of people. Studio portraits don't excite me much. That's why my people images are       environmental, that is, they are photos of people in a comfortable environment, be it a public setting or in their homes.

For this month, I will share how I set up my shots, and how I approach folks, such as when
I cautiously approached this stranger in his private home. This is John. Let me set the scene.

This is a building I saw while driving in the middle of Arkansas. I think you would agree that it looks abandoned. I did. The surreal building really got my attention. I looked for vehicles, for life, so I could ask permission to start shooting. Not a soul in sight, so I set up my equipment. The most intriguing parts of the building were the strangely placed windows near the roof.

After a few minutes of shooting, I took my eye away from the camera and just stared at the building, wondering who used to live there, why they had added those windows, and what that large piece of black plastic was covering up. Lots of questions floating through my head. When I was done and put up my equipment, I walked toward the building to get a better look at the oddities that served as its facade. When I got about ten feet from it I heard faint music. I looked around, looking for the source of the music. As I got closer, it hit me--the music was coming from inside the building! I ignored all common sense and decided to gently knock on the door. "Come in," I heard a man say in the deepest and scariest of voices. I knocked again, not sure of what I had heard. "Come in." I slowly opened the door, fearing that I would hear the sound of a shot gun being cocked. 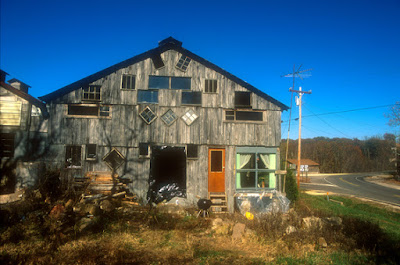 I opened the door slowly, with thoughts of my last day on earth ringing in my head. And this is what I saw. 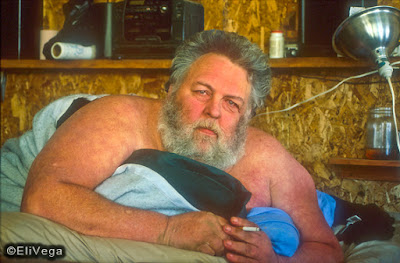 I introduced myself and told the man I was a photographer, and that I had found his house interesting. "I hope you don't mind, but I was just taking pictures of your house outside." He said his name was John, and, no he didn't mind. We talked for a long time. I will share the abbreviated version of our long conversation. John said his wife lived in the house next door. It kept them from fighting, he said.

The building and the grounds were at one time home to a 1960s Hippy commune. Could that explain the strange windows?

After more casual conversation, I took a chance and told John that I found him very interesting and that, if he didn't mind, I'd like to take a picture of him. "Like this?" he asked, as he pulled the sheets and pillow up to his bare chest. "Sure," I said, "That's okay."
As luck would have it, there was a window behind me, as I set up my tripod low to the floor. The window provided great diffused lighting into the room, which provided nice even lighting on John.

The time I spent getting to know John was critical. I felt more relaxed with him, and he trusted me enough to allow me to photograph him. If I had moved too fast for the sake of taking a picture, it would not have happened. I would not have this image in m collection.
I even have his signed model release!!

I was driving downtown Denver, Colorado. Something silver walking on two feet caught my attention. I looked to my right and I saw a man in silver walking down the side walk. I wasted no time. I parked and put coins in a parking meter, grabbed my gear, and ran to find him. Almost out of breath, I finally caught up with him, as he stood in front of a small low-end jewelry store. I introduced myself as a photographer. The first thing I said was, "Man, I love your art! I think it's so cool. Tell about it." He didn't hesitate. He talked fast. He was a street performer. His specialty was defying gravity, and the silver was his street persona. His "stage" name is JAMBOT.

After several minutes of chatting, I asked him if he would mind if I took his picture--I always use that language; words the general public uses. JAMBOT was a street hustler. He quickly responded, "What's in it for me?" "I don't know. What did you have in mind?" I asked. "50 dollahs," he quickly responded with an accent. "No, I can't afford that, I told him. "I tell you what. If you sign a model release (I explained what that was), I'll give you $10.00." He agreed and I started shooting.

It just so happened that the awning he stood under was painted red. When I pointed my camera at him, I noticed that he was red and silver--his face reflecting the hues of the red awning! I continued shooting. Then, we shook hands and the shoot was over.

Let me insert an editorial comment here. In my new book, Right Brain Photography, I talk about how the concept of "impermanence" applies to photography. That opportunity of catching up with JAMBOT does not happen often. It does not last forever. I didn't see JAMBOT downtown Denver after that encounter. The message behind "impermanence" is:.
Take it now. Do it now. We might not have that chance again. The moment will be gone; it is not a permanent moment. The result of applying "impermanence" is that, over the long run, we will accumulate one-of-a-kind images. 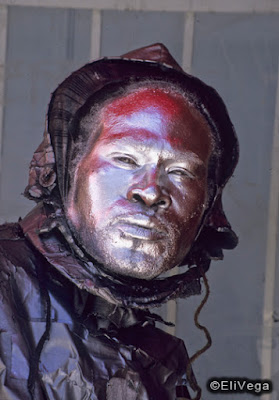 I was downtown Fort Worth, Texas. An apparent homeless man got my attention. I went up to him and we started making idle chit chat. I just happened to have my camera with me. As I always do, I asked him if he'd mind if I take his picture? He ran his fingers through his white hair and said, "I'm not ready...." I told him not to worry about it. He asked me what
I wanted him to do. I said, "Think about whatever it is in your life that makes you smile." He looked away with a pensive look on his face and said, "My daughter. I don't get to see her much." Click. I got my shot the instant he finished his sentence.

I call this image "Nowhere Man." It's the weathered look and his distant glance that make this image. He's looking at me, but he's not. 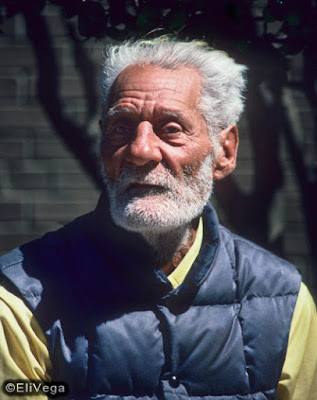 These guys were street performers on Pearl Street Mall in Boulder, Colorado. They actually weren't performing; they just stood there, quietly, without moving. The middle skinny guy must have sensed me. He turned and took a quick glance at me as he moved out of the shadows. When he saw me, he quickly moved back into the shadows. I photographed him the second his face was in the sun. Am I that fast? No. What I do with scenarios like this one is, 1) Aim my camera at the action, the three guys in this case; 2) Take a test shot and make any exposure adjustments(using my exposure compensation dial); 3) Aim my camera again, keeping my finger on the shutter button; 4) Then, when something happens, I am totally ready to grab the shot. I did just that when the middle guy looked at me. It's not about luck. It's planning, anticipation, and quick reflexes. 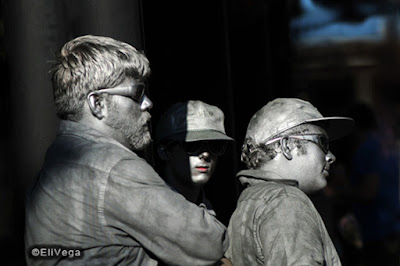 
This last example was also created on Pearl Street Mall--a place that for several years has served as a great place to photograph people. I will show you the image first before I explain how I was able to get this Rembrandt-like image of Michael. 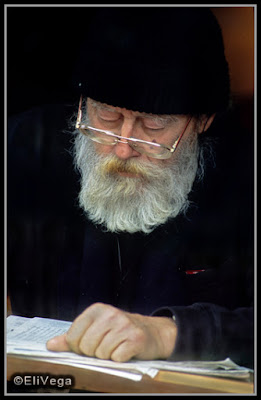 As I always do when I walk along Pearl Street Mall, I was looking for that something special; unique; out of the ordinary. When I saw Michael, the scenario met my criteria. I don't remember if he was reading the paper or doing a crossword puzzle, but he seemed intently focused. Even though I was standing right in front of him, he didn't notice me. I walked around, tactfully got his attention, and introduced myself. As I always do, I told him I was a photographer and that I found him extremely interesting. "Would you mind if I take your picture?" "No, not at all. What do you want me to do? he asked. "Oh, just keep doing what you were doing...."

I walked outside and set up my tripod and photographed Michael through a window. There was an awning that covered both of us, so the lighting was softly diffused. The only details that stood out were his face, beard, hand, and glasses. When I finished, Michael kept doing what he was doing, inside a Starbucks.

As you can see, I don't ask people to smile as they look at me. I prefer that candid feel to my people images. I want my images to reflect who they are, not who or what they think
I want. Discretion, tact, patience, and respect are my guiding principles when I approach strangers. I have yet had anyone say, "Get the hell out of my face."

The most difficult part of all this is having the gumption to approach strangers. There is that fear factor; that fear of being rejected--or worse. Here is what helps me. I learned this lesson years ago: If you ask, you might get it. If you don't, you won't.

So, go out and meet people. After all, we're in this world together. Have fun!

Ask me anything at www.elivega.net

Posted by Eli Vega Photo Artist™ at 4:42 PM No comments: