This combined skill and ability in photography is worth repeating. During all my years of teaching photography, one of the disconnects I have seen is the one that exists between knowledge/understanding and skill/ability. For example, it's one thing for a photographer to say, "Oh, yeah. I know photography is art. I know all about interpreting versus documenting." I have seen the weak results of some of those who say they "know."

I can best explain what I mean by sharing a real life story. I was with one of my students in  the quaint town of Hygiene, Colorado. We were photographing in and around a shop where the owner paints and restores old farming equipment. As we were setting up one shot, my student pointed at something and said, "See that? You might think I'm weird, but I'm attracted to that." I told her, "No, I don't think you're weird at all." Then I taught her how to create art from something dull and mundane.

Below is what she was pointing at. Not pretty huh? I give her credit for thinking that this was cool. On the inside of this window was the owner's shop. He used a table platform to paint smaller pieces of farming equipment. Throughout the years, paint had splashed on the inside of the window and had dried. By shear coincidence, the splattering of paint had created some unique designs, shapes, forms, textures, and colors on this window. However, years of hot sunlight had taken its toll on the outside of these windows.

I could see the art that attracted my student. I taught her my CDE mantra, a formula I have followed for years. I first pointed out what Composition I thought would work best. Then I told her what f/stop would be enough for the needed Depth of field. I then showed her the third piece of the formula, which was critical for this particular scene--Exposure. 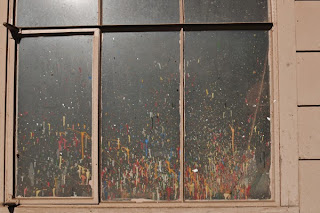 Below is what the composition looked like before I taught her the E part of the formula.
I liked the way the shapes and colors came together in the middle window pane. But, there was still a problem--the window looked dull with so much sunlight and grunge. The next step was to see what we could do to turn this interesting but still dull composition into something more interesting, maybe a piece of art. 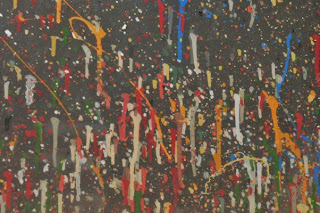 I told Pauli we were going to intentionally under expose this image to make the colors "pop" and darken the background, using the exposure compensation dial, which most cameras have today. She was curious as to how much under exposure we needed. After a couple of test shots and making some adjustments, I concluded that by underexposing this scene by two complete stops we had created a piece of art. Two stops is the same as giving this scene 200% less light than the built-in meter thought I needed. Yes, 200%.

Both our images looked very similar. Pauli was so excited about her results that she posted her image on her Facebook page! This is my interpretation of the window above. 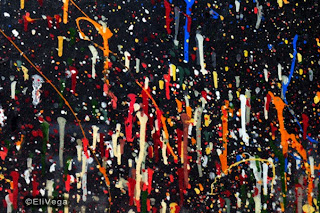 Here is the lesson, which I talk about in my workshops and upcoming book: I look with my eyes, but see with my imagination. If I only saw what my eyes looked at, I would have probably not photographed that ugly and dirty window. Best case scenario, I would have maybe photographed it, but would have ended up with the middle photo above.

Seeing with our imagination means imagining what and how we can make anything look uncommon, no matter how dull or common. We can even make the sane insane.

Question: Without having read this blog, would you have guessed that the final image was just a dirty window?

So, go out there and see with your imagination! You might surprise yourself. Contact me if you would like to enhance your skills and abilities to create this type of photographic art.

Posted by Eli Vega Photo Artist™ at 8:35 PM No comments: