Boulder, Colorado, more specifically, Pearl Street Mall in Boulder, is one of my favorite places to visit in Colorado--I am only ten minutes away. Boulder reminds me, in many respects, of Luzern, Switzerland. Pearl Street Mall, which is a pedestrian Mall opened in 1977, reminds me of New Orleans in that, when the weather is accommodating, there are many street performers entertaining the passersby. It's decent protocol to tip them...:-)

Today, my good friend Jeff and I were strolling down Pearl Street Mall on a pleasant December day. As usual, we saw several street performers. But, the one that really caught my attention this time was young and talented Henry, playing the most unique instrument I have ever seen--the Diddley Bow. This instrument, I found out later, is said to have its roots in the deep south and is of African origin, probably from the Ghana coast. It is rarely seen outside the rural south. It is played on a flat board, with a glass bottle as a bridge and either a piece of metal or glass as the slide, sort of like on a steel guitar. The instrument has a significant historical role in Blues music. Other names for it are the "jitterbug" and the "one string."

Before I show you Henry doing his thing with his Diddly Bow, here is my good friend Jeff enjoying Pearl Street Mall. 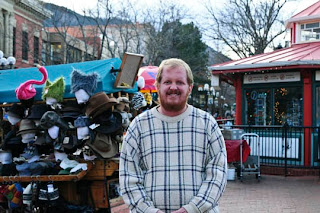 And, here I am thoroughly enjoying Pearl Street Mall, which is at the foothills of the Rockies (you can see them in the background). I love this place! Some of my best photo images I found along Pearl Street. 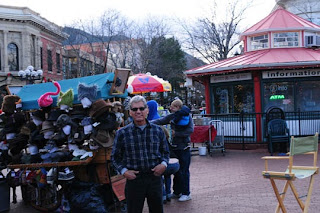 And here are a few of my photographic interpretations of young Henry entertaining the crowds. Henry said, "Cool." when I told him I wanted to add him to my blog........Enjoy. 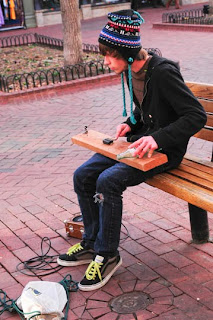 Check out the amplifier next to his feet. 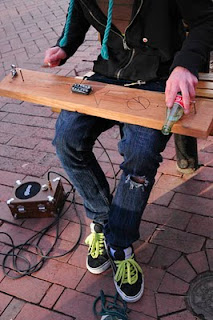 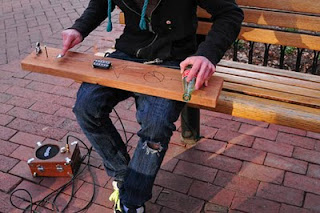 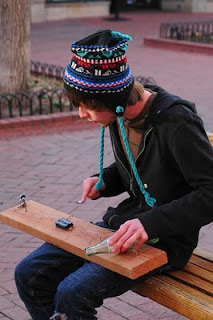 Posted by Eli Vega Photo Artist™ at 9:14 PM No comments: