This is my sixth year of photographing this phenomenal event. If you get a chance next year, I highly recommend it. The event draws international teams of artists. There is only one common denominator: All sculpture teams start with a 20-ton block of packed ice and snow, reaching a height twelve feet! From there, it's all individual creativity. It is absolutely amazing what the artists can create from a block of ice and snow. As Michelangelo once said, "I saw an angel in the block of marble and I just chiseled 'til I set him free."


I created several images of the event this past weekend, but only include a few here for your enjoyment.

These first two are from the snow sculpture "Freeze Frame" by the USA/Loveland, Colorado team. The sculpture faced in the direction of a clock tower in the town of Breckenridge. The design was that of a large 8"x10" camera. Inside the snow camera, the artists, true to the mechanics of such cameras, designed an inverted and upside down reflection of the clocks on the clock tower. Amazingly creative.


The spectators provide a good sense of scale. 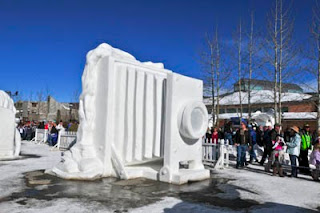 The backside of the camera was as if you could look inside the camera and see the inverted/upside down image. 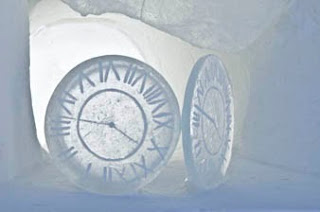 "Marco" was by the USA team from Vermont. It is a sculpture of two boys in the water playing the game of Marco Polo. From this perspective, I took advantage of flare from the sun, which to me symbolized the boys having fun in the bright sunlight. 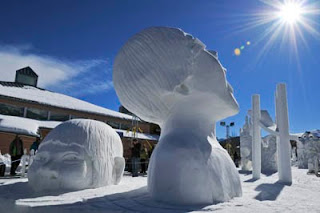 "Medusa" was by the USA team from Wisconsin. How they managed so many smoothly curved areas throughout the large snow and ice area provided is beyond me! 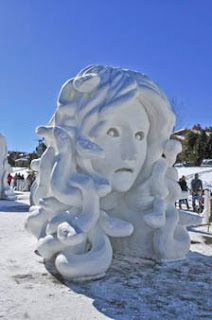 "Mére De Nation" was by the Canadian/Quebec team.The stylized wedding dress "pays homage to the adventuresome young brides who crossed the Atlantic to marry the settlers of the St. Lawrence River Valley."
An added feature to this year's event was the addition of colored lights strategically placed and turned on at
twilight. It really added a nice touch to this sculpture, which was hollow inside. 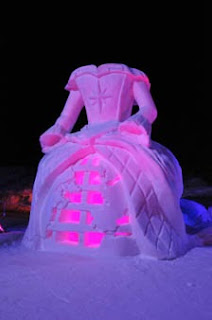 "Spirits of the Aurora" was by the Canadian/Yukon team. It is based on the Aurora, or Northern Lights, which "are believed to be the torches held in the hands of Spirits seeking the souls of those who just died."It took second place this year. 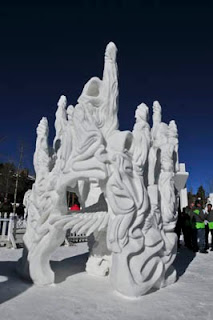 After 2-3 hours of shooting, I took a much needed break. I went back to the event at twilight to continue my project. The inside of "Spirits of The Aurora" after the colored lights came on was a perfect opportunity to capture "the dead" in color. 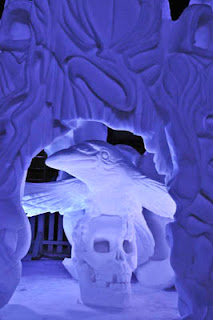 And....drum roll please...............First place went to "Alebrije" (brightly colored Mexican folk art sculptures) by the team from Mexico.  The caption read, "Eagle-Sun; Jaguar-Rain and Snake-Earth are all dual mythological beings in Mexican culture. United in an Alebrije, it has the capacity to give life on earth." 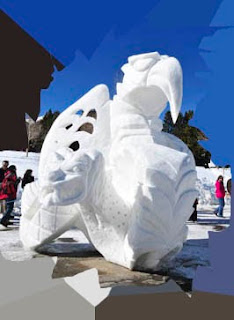 So, did I get you interested in Breckenridge's annual Snow Sculpture Championships? They're held the last week in January. Check it out next year! www.gobreck.com
Posted by Eli Vega Photo Artist™ at 8:16 PM No comments:

Spring, believe it or not, is just 2-3 months away (depending on where you live). If you love photography, or photo art as I prefer to call it, I invite you to spend spring with me and David A. Dobbs (photographer out of Georgia) in the Great Smoky Mountains during a 4 1/2 day photography workshop. We will be covering both the technical and creative sides of photography through a series of workshop sessions, discussions, slide presentations, lots of in-the-field shooting, and a chance to receive feedback on your daily work from me and David.

If you're interested in learning more about this exciting, fun, and educational workshop, either:

1) Shoot me an e-mail and I will send you more information: vegaphotoart@gmail.com
OR
2) Visit David's website (www.dobbsphotography.com). He has more detail under "workshops."

I'll give you a preview: One of my workshops will be on Eli's 5-Point Photo Art Model™

I'll leave you with a photo tip: If you take the labels off, you will begin to "see" differently. Think about this, for example: If it wasn't a tree, what would it be? Hmmm?

Posted by Eli Vega Photo Artist™ at 12:36 PM No comments: