DON'T BE SO SERIOUS--HAVE FUN WITH YOUR WINTER PHOTOGRAPHY!

Do I like snow on the mountains, iced-over lakes, colorful wildlife against white snow, and skiers on the mountains? You bet. However, don't limit yourself to the tried and true. Have fun with your winter shots, as in this image of dogs having fun in the snow. It might appear like a simple shot, but there are several ingredients that go into creating this type of fun photography.

Let me show you the image first, then I will explain what list I went through to maximize my chances of getting it "correct." Notice I put "correct" in quotation marks. As I have mentioned in earlier posts, there is no such thing as "correct." What I look for is what looks right  to me.

On this day, I had already photographed the snow sculptures during this year's annual International Snow Sculpture Competition held in Breckenridge, Colorado. I knew of this dog park in town and decided to check it out. Intuition, if you have it, can really come in handy in the field of photography. I wasn't disappointed. There were a lot of owners letting their dogs run free in the park. I saw dogs chasing, and catching, frisbees; some were chasing after colorful balls. It was just fun to watch. Here's that cute image of dogs playing in the snow. 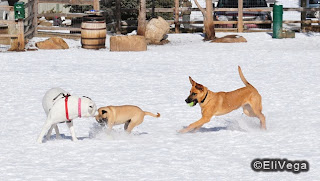 Now, for the think-through list. First, the technical left brain stuff. Snow can fool the built-in light meter in the camera. I took a few test shots at different spots in the dog park, and made adjustments, using the exposure compensation dial in the camera. I decided that a +1/3 exposure was going to work pretty good. I didn't want to over-expose too much because I would lose the feel and texture of snow and end up with a lot of white in the photo. I knew I needed good depth of field (I couldn't predict where or how the dogs were going to be when I got my shots), yet fast shutter speeds because I had moving targets to photograph. So, shooting in aperture priority, I decided f/10 would get me enough depth-of-field regardless of where I got my shots, then decided on ISO 500 so I could have my cake and eat it too---get enough depth-of-field, yet get a fast shutter speed too! This image was at f/10 and a 1/2000th shutter speed. White Balance was on "daylight."

Now, for the none technical stuff. For these kind of shots you've got to be prepared. Have all the technical stuff set and ready to go, then watch the action for awhile to get a sense of what the challenges might be. Anticipation, speed (have your finger ready on the trigger), and continuous shooting (4-8 frames per second) are crucial. For this shot, I saw the guy throw the ball. I just followed the action, the dogs, and when they stopped all of a sudden, click-click-click!!! I was able to get the action of all three dogs, the frozen splatter of snow, and "freeze" the fast-moving dog on the right--the one with the green ball in his mouth. I got several good shots that day. This was one of my favorites because it gave me the essence of what the dogs were doing in the snow--having fun!

So, go out someday and, like these dogs, have some fun in the snow.....with your camera.