PHOTO TIPS ON GETTING GREAT FIREWORKS


I like what Jackson Pollock said about his splashing and splattering paint on his canvasses on the floor. He liked not having complete control of the outcomes. Such is the case with shooting fireworks--but therein lies the challenge.
I always say that photography is more art than science. My right brain shakes hands with my left brain and says, "Hey. I've got an idea, and this is what I need from you."

Let's start with the idea. The idea for me is to get, during the 30 minutes or so of fireworks displays, single, double, and even triple exposures. In other words, photograph single bursts in the sky, maybe two different bursts in the same "frame," and even three bursts in the same "frame." So, what what does my right brain tell my left brain to do? Here are the steps.
1) Tripod-- this is a must. I prefer a user-friendly ball head on my tripod.
2) Lens: Depends on how far I am from the fireworks and whether I'm going to include any foreground or just the 'works up in the sky. This year I used my 17mm-50mm because I was close to a lake in Estes Park, Colorado and also close enough to the fireworks that my 50mm could get those close-ups too.
3) ISO-- 100 to minimize "noise" and get more crisp details.
4) F/stop--- f/8 (that seems to be a good standard for me--since the 'works are far enough  from me that I don't need f/16 or higher).
5) Focus mode-- Manual. Fireworks, because they're moving, will confuse my auto focus and I'll miss some great displays. I just focus roughly where most of the fireworks are coming up--- f/8 will do the rest, i.e., cover most distance changes between bursts.
6) Exposure setting: BULB. Read your manual on how to set your shutter speed to BULB.
7) Cable release-- this is a must to eliminate camera shake caused by depressing the shutter button with my finger.
Now, here's where the fun begins.
8) I use any piece of opaque material as my "shutter"--This year I used three 8.5"x11" pieces of paper folded in half. That allowed me to get some double & triple exposures during the night. This is how I use it as my "shutter."
A) I open the shutter with my cable release and keep it open, but cover my lens with my
"shutter"--no light coming in. As soon as the first display shows, I take away my
"shutter," i.e., remove my faux shutter and leave it off until the first burst begins to
dissipate. Then I quickly put it back (in essence, "close" my "shutter"). Then I release
my cable release---I just got my first shot.
B) For my double exposures, I follow the same as above, except I don't release my cable
release after the first shot, but I quickly cover my lens with my "shutter" after the first
burst. When the second display comes up, I again take away the "shutter" for my
second shot, then release my cable release. For my triple exposure, I do the same,
except repeat the process two times.
This technique allowed me to keep my real shutter open for up to 19 seconds for one triple exposure shot without overexposing the end result. Although my real shutter was open for 19 seconds, each of the three exposures really received one to five-second exposures.

And here are some 2014 results from my technique. Try this next time. It's a lot of fun!!
Feel free to contact me if you have any questions. 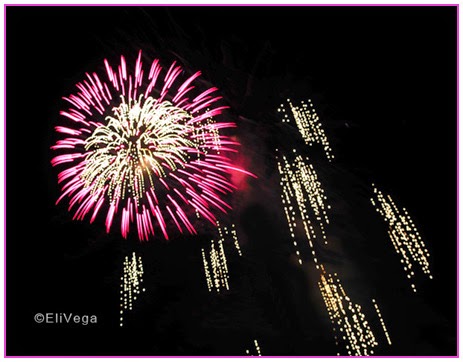 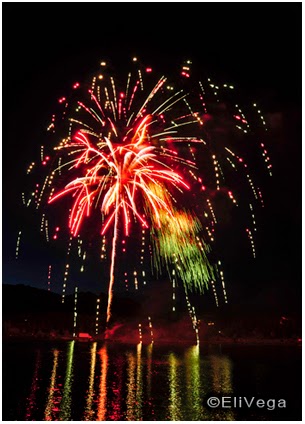 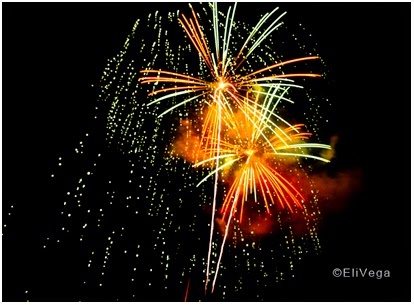