SEE WITH YOUR IMAGINATION
(Not your eyes)

I talk about this in my new book, RIGHT BRAIN PHOTOGRAPHY. It is one of the hardest concepts for many photographers to grasp. There are several reasons as to why that is, but I won't get into that in this post. I will, however, talk about what that means to me and how I apply it to my photography.

I recently had a 4-hour 1-on-1 photo lesson in The Ozarks near Eureka Springs. My student was one of my most devout students from Colorado. I will use our 4-hour photo shoot as my tip this month.

Selma and I spent our time around Lake Leatherwood, a city lake near downtown Eureka Springs, Arkansas, and nearby Blue Spring Heritage Center.

We did not have much to play with that day. The autumn colors were not to be, it was a warm bright sunny day, and just not much that jumped out at us. Herein is my tip for this month: 1) We should not limit ourselves to photographing only that which hits us between the eyes; 2) We should see with our imaginations, not our eyes. If we only see with our eyes, we will often be disappointed with what we see.

My three years as an art major taught me to create something that wasn't there. I apply that same concept to my photography, but in a different way, since I'm working with a different medium. I ask myself, not how can I photograph what my eyes see in the best way possible, but also, what can I make that look like, other than what I see with my eyes. When I "see" that in my imagination, my right brain shakes hands with my left brain and says, "I've got an idea, and this is what I need from you."

I kept telling Selma, "See with your imagination," as I pointed out certain photo opps to her. As a result, we were able to see what we didn't see.

I'll start with a couple of images I created while walking around Lake Leatherwood. As we stood on top of the old CCC stone dam, I pointed out some reflections in the water to Selma. I told her I was going to focus on the reflections, with just a sliver of land, but I was going to show it "upside down," with the blue sky reflections as the top of the image. Here is the result of that imagination.

If you look closely, there are two abstract water horses, and even a strange brown-looking face in the lower middle part of the image. From a left brain perspective, I underexposed the scene by a -1 2/3 to bring out the colors, which also gave me a faster shutter speed (1/640), to freeze the rippling in the water. A unique abstract just waiting for me to "see" it. 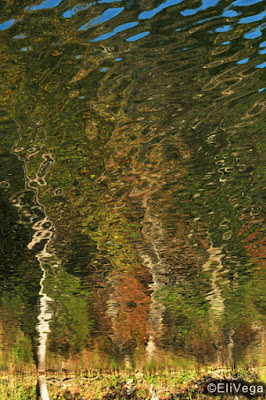 I underexposed this scene also by -1 2/3, again, to bring out the colors in the leaves.
The water was reflecting the dark autumn-brown leaves from above, therefore making the scene dark, except for the bright green and yellow leaves. By underexposing, it keeps the darks dark, while accentuating the variance between darks and lights,

Can you see the strange face above the yellow leaf? 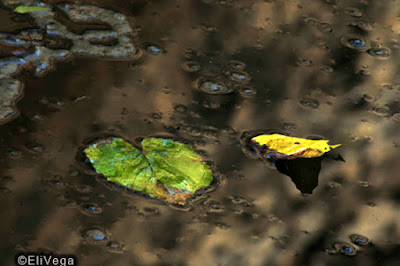 Now we move on to the Blue Spring Heritage Center. We came upon this scene and I told Selma that I thought this would make a good double exposure. She asked, "What is it about any scene that makes you think it would be a good double exposure?" Good question. My answer was this: It has all the elements of a good painting--the trees on the left facing in, the gazebo, the trees on the right facing in, the reflections. You almost see a complete circle, if you follow the direction of the trees, and the reflection.

I spend an entire chapter in my book on composition. This scene, without much effort on my part, had several elements of good composition. 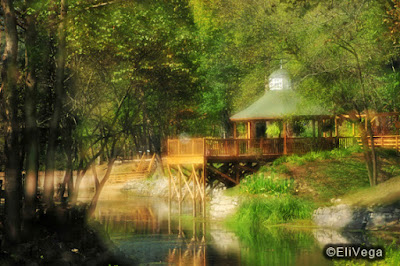 Let me pause here to remind us of one fact we can easily forget. Without getting too technical about it, our eyes have the incredible ability to adjust quickly between detecting detail in very dark areas and very bright areas in any scene. In fact, they do such a good job that high-contrast scenes can often look "flat," not appearing to have much contrast at all. It has to do with the eyes' rods and cones. We can look at the darkest part of a scene and our eyes quickly adjust to that; we can then look at the lightest part of that same scene and our eyes quickly adjust to that too. Our camera sensors, and film, do not have that talent--and I take advantage of that.

The above fact can fool us, which can lead us to move on, as we look for something more interesting. However, I have trained my mind (my imagination) to see what my eyes might have missed. If I see part of a scene that is receiving light and another part that isn't, I stop and let my imagination take over. What can I make this look like?

When I saw these flowers being hit by sunlight, against dark foliage in the background, I knew I could create something my eyes didn't see. The scene actually looked rather flat to my eyes, not much contrast. What I do with a scene like this is either use spot metering (meter on the brightest part of the flower, in this case), or do some extreme underexposure. I went with the latter on this one, which, in essence, can achieve the same results as spot metering, but it's quicker. I underexposed this scene by a - 2 2\3 stops to get this effect. Yes 2 and 2/3 stops--almost 300% less light than the built-in light meter thought I needed for a "correct" exposure.

Selma kept saying throughout the day that she felt very uncomfortable going down that far on the underexposure. I kept reminding her why I ignore my histogram, and that there is no such thing as a "correct" exposure; there is only the right exposure, and we define that. 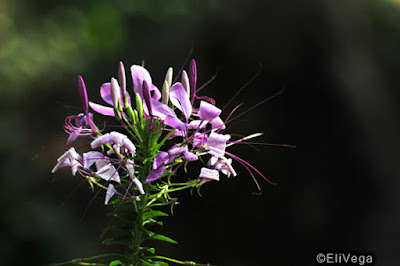 More reflections. We came upon a section of water at Blue Spring Heritage Center. As I had done all day, I pointed to a certain part of the water and told Selma I was going to use the floating moss and other natural elements in the water as the "top" of those trees. This is what we saw. 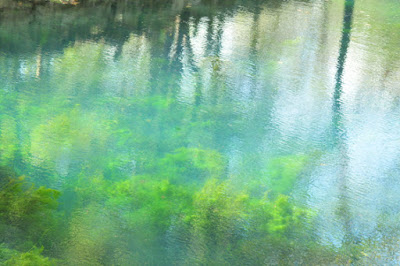 I told Selma that I was going to show the image "upside down." The result was impressionism through photography. I wasn't looking at what was there; I was looking at what I could create from what I saw with my eyes. 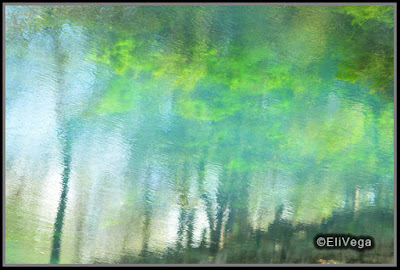 At the end of the lesson, Selma shared her "take-aways" from the day. She clearly understood that it isn't always what we see, but also what we don't see, that might make for an interesting image. In fact, she created some great images of her own that day.

So, as hard it might be for you, deprogram your mind. Stop "taking pictures" the way we were taught since we were two years old. Instead, create images using your imagination. Start seeing what you don't see.

Contact me if you would like a 1-on-1 or small group lesson. Selma is one of my best testimonials.

Posted by Eli Vega Photo Artist™ at 5:53 PM No comments: