There are three conditions in which I prefer to go out in search of waterfalls: 1) Overcast skies or thick clouds, to minimize harsh contrasts and blown-out light-colored waterfalls;      2) Spring or early summer, when snow run-off is at its peak, unless the falls are in an area where water is always running; 3) after a heavy rainfall.

Don't let formulas, or recommended formulas, dictate what your settings should be. Let your desired results determine what settings you'll need. If you need a formula, use a "If/Then" formula: If I want it to look like that, then I need to do this.

With that introduction, let's start with a time when lighting was not ideal. It was a harsh bright sunny day when I was photographing Cedar Falls in Arkansas. I didn't like what I was getting. But, as luck would have it, I heard loud but soothing chanting coming from below the falls, in the shade. Sometimes Plan B works out better than Plan A. Seize the moment. 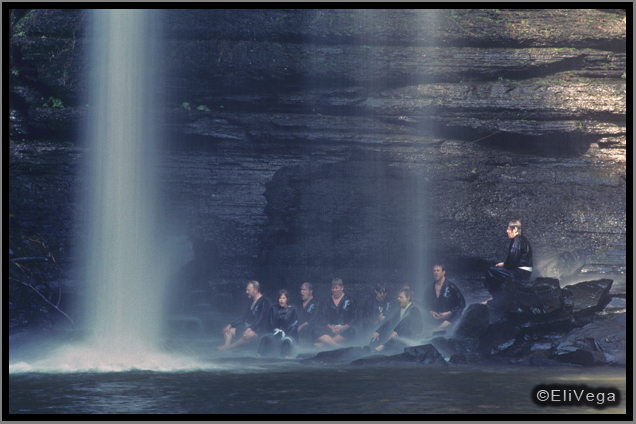 Idaho Falls, in Idaho Springs, Colorado. I have photographed this waterfall in winter,
summer, and autumn. There is no such thing as spring in Colorado! 😊

I have several tight shots (close-ups) of the falls, but I like this one because it shows off its unique context--the steep, near vertical mountainside and the historic waterwheel. The bonus was the eye-catching fall colors and the flags. I spend an entire chapter in my book, Right Brain Photography, on composition. 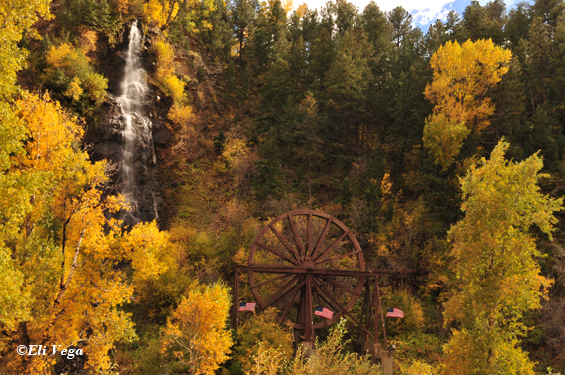 Multnomah Falls. The rainfall index in Oregon creates a lush topography, as represented by this awesome waterfall. As opposed to the image above, a vertical shot did a better job at showing off its environmental context. 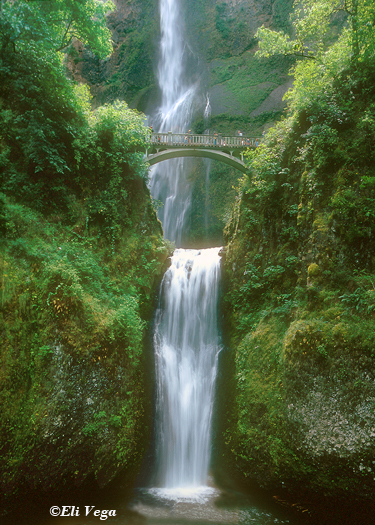 Ouzel Falls in Rocky Mountain National Park, Colorado. A great waterfall indeed. However, the day I was there, I was more captivated by the feeling I got more so than its visual presence. The waterfall was in its prime--gushing down loudly and proudly. Not only could I hear the loud roar of the falls, but I could feel its power. The earth vibrated beneath my feet. However, as loud and powerful as the sounds were, I felt a sense of calmness; a sense of peace and tranquility.

Before I show you how I photographed those feelings, let me share what my eyes saw. A fast shutter speed (1/200) captured it's power, which is what I wanted for this image. However, I wanted to translate my feelings. I carefully made my way around that big boulder in the foreground--the ground was cool, damp, and slippery. 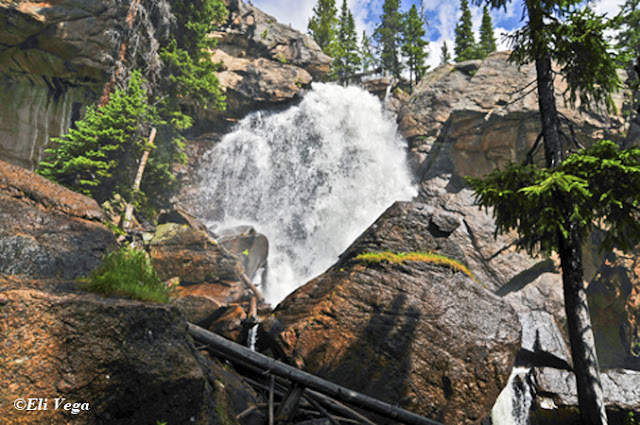 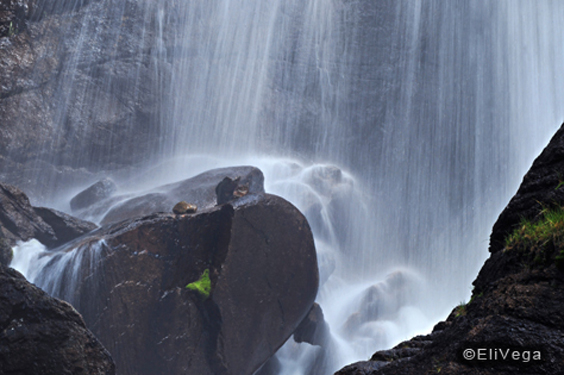 The Eureka Springs, Arkansas area had experienced several days of heavy rains. During a day drive to see what I could find, I stopped at a convenience store out in the country for a snack. I just happened to run into one of my former students who was familiar with the area. She asked me, "Have you been to Sweden Falls?" I said, "No. Never heard of it. Where is it?" She gave me the directions, told me she and her daughter were just there a few minutes and, and that, unlike other times she had seen it, it was really flowing! I had to go.

I found it. It was very cool that day, with thick threatening clouds. The ground looked extremely wet. Should I or shouldn't I? My intuition won out and I put on my rain gear and took off. Along the way, I met a couple of hikers who warned me, "Be careful. It's slippery in places." My intuition kept saying, "Don't succumb to your fears. It might be worth it." I'm glad I listened to my intuition.

They were right. It was slippery, everywhere. I could hear the sounds of the falls as I got closer. Finally, there it was--Sweden Creek Falls.I could not get a good view of the falls from the trail, so I carefully inched my way off the trail a bit. I found myself on top of a precarious outcropping. I could have got closer to the edge of the outcropping, but decided to stop at a point where I could get a decent angle, without endangering my life. I later found out from a hiker that a photographer had indeed killed himself there when he tried to get too close.

Tip: Don't just start shooting. Slowly think it through. Repeat to yourself, "What do I want the falls to look like?" I wanted a silky, smooth feel to the flowing water. A 1/8 of a second shutter speed gave that to me.

I always tell folks around Eureka Springs that the greens in the Ozarks are "Photoshop greens." 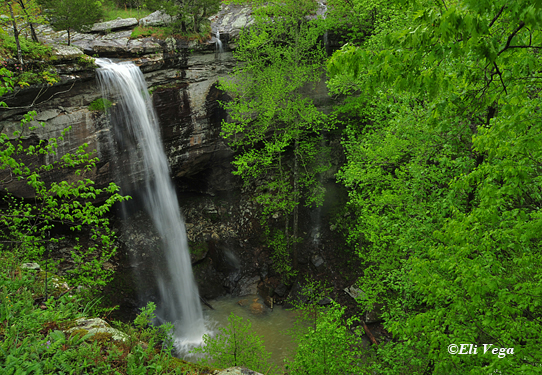 I had heard of Dogwood Canyon Nature Park in southern Missouri and how beautiful it was. So, out I went on a daily excursion. I was not disappointed.

A huge cloud had cast a shadow on the falls. Click!

Unlike the other waterfalls in this blog, this one did not have an interesting environment overall, which is why I went vertical and tight on this one. 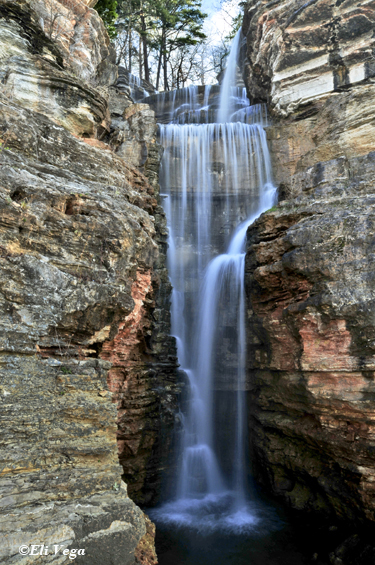 About three miles southeast of Steamboat Springs, Colorado is Fish Creek Falls. It's my favorite waterfall in Colorado. As you can see, its environment was worth incorporating into the composition. 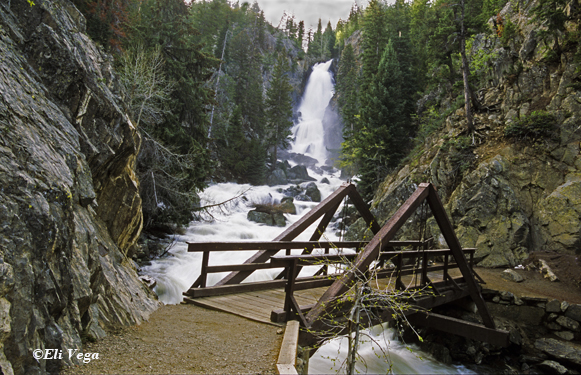 Lower Yellowstone Falls, 308 feet to the bottom! I love photographing around my birth state. My two favorite locales to take my camera are the Grand Tetons area and Yellowstone Park.

I also created the more typical and common shots of this majestic waterfall--both horizontal and vertical tight shots that show just the waterfall and a little of its surroundings, but I favor this one that shows the falls, where it comes from, where it hits, the dynamic canyon it drops into, and the continuation of the Yellowstone River below the falls. From Artist's Point. 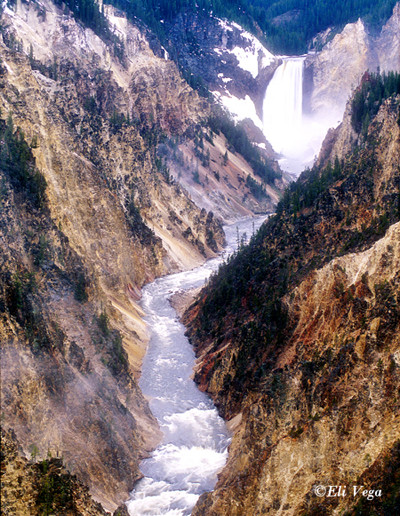 I hope this has motivated you to drive and hike to your nearest waterfalls. April and May are just around the corner, so make sure your To-Do list includes waterfalls.

Experiment with your compositions, exposures, and shutter speeds. Have fun.
If you live near me, holler at me and we'll go together!

Posted by Eli Vega Photo Artist™ at 6:48 PM No comments: