The etymology of the word "photography" leads us back to a Greek word that means "painting with light." That makes sense, since at the time photography was invented in Europe, the closest art form that resembled this new invention was painting on canvas. Canvas artists painted with oils; photographers "painted" with light.

If we take that concept and push it to the Nth degree, only our minds can limit what we can do with photography. One of the most fun and creative techniques I have applied to my photography is just that--"painting with light." I like to select subjects that are commonly photographed in early morning, during the day, or late in the afternoon. I like to photograph them at night or twilight and "paint" them with light.

Let me know if you would like a 1-on-1 lesson. I can help you add something new to your photo collection.

Although I have several images, the first three examples were all created at Garden of The Gods in Colorado Springs, Colorado.


For this one, the exposure was slightly over one minute, with my camera set at BULB.
I used two simple off-road emergency lamps/flashlights, one with a warm-colored output; the other with a blue/gray output. While my camera was in BULB mode, I just held one flashlight in one hand and the other in my other hand and moved them slowly around the edges of this particular formation. It was approximately 8:40 pm. I prefer to shoot these at 15-20 minutes after sunset. 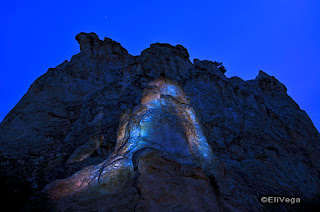 I chose a variation of "painting" for this next example. I painted the walkway first as I walked and shined the flashlight on it. When I was done, I walked back next to my camera and then painted the formation on the left. Combined time for the walkway and formation was slightly over two minutes, at approximately 8:00 pm. When it's pitch dark, moving objects, like me walking back to my camera, are not recorded on the film or sensor. 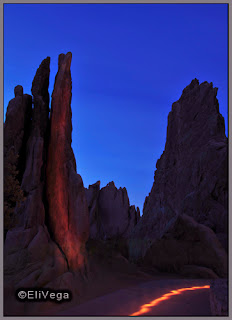 This next image appears on the cover of my new book, RIGHT BRAIN PHOTOGRAPHY (Be an artist first). Feel free to contact me for your own personal signed copy.

Here are some factors that went into the creation of this image. The distant formations were so far away I knew they would not receive any light from my flashlights and would turn out as silhouettes. Any moving clouds in the sky would be blurred as a result of a long exposure. It was pitch dark, so I had to light the front formation with my flashlight so I could manually focus on it. I then set the BULB feature on my camera, like I did for the other two examples, and proceeded to slowly "paint" with light. Like the first example, I used both flashlights for this one, outlining the formations, then filling in the middle more quickly just to add some "fill light" to the formations. And, voila!! The exposure on this one was just under five minutes! It was around 9:00 pm. 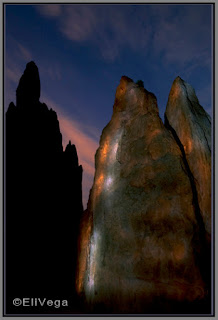 This last example was at famous Mesa Arch in Canyonlands, Utah. Photographers love to photograph it early in the morning when it glows reddish-orange. But, I wanted to do something I had not seen done before---photograph it after the sun went down, but not at nighttime.

I went there in December, hoping to get some snow-capped mountains in the background.
I chose that magical twilight, that time between sunset and nighttime. I only used one lamp/flashlight, my warm-colored one. After I got my composition, I simply "painted" the underside of the arch for about 30 seconds. Doing it is simple; it's thinking about the idea that is more difficult, especially when applying left-brain photography which relies more on proven facts, real examples, and linear thinking. I have been asked if this was "Photoshopped." 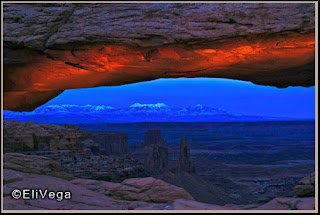 Now that you know how this is done, go out and have fun with it. Experiment. Let loose. Don't be afraid of giving up control. In fact, the more you let go of control, the more control you'll have. Any subject you can shine light on is a good subject. Use your imagination!!

Posted by Eli Vega Photo Artist™ at 12:52 PM No comments: